Breeding and growth of chickens

Egg-laying hens and meat chickens are sometimes infertile. They are hybrids, produced from two selective breeds or lines in a breeding facility. Meat chicken and egg producers do not raise their own animals, but buy them in large batches from the sellers.

In a breeding facility chickens are either inseminated or allowed to mate with a rooster. The sperm  cannot enter the ovaries immediately, because there are always developing eggs blocking the way. The sperm is deposited in the vagina, which has small membrane sacs for storing the sperm. When the oviduct is free after the oviposition (laying of the egg), the sperm can continue towards the ovaries. The funnel-like end of the oviduct, the infundibulum, has membrane sacs similar to the vagina. Here the sperm stay fertile for a long time: 8-10 days in chickens, less than a week in geese and 3 weeks in turkeys. Most fertilizations happen 2-3 days after the insemination. In poultry houses, best results ar achieved by inseminating non-pregrant hens once a week.

Roosters are sexually mature at the age of 16-20 weeks, but aren't selected for breeding until the age of 24-32 weeks when their sperm quality has increased. Most roosters cannot produce high-quality sperm for long. Roosters' testicles are located in the body cavity right behind the lungs. They have no penises, so the ductus deferens leads to the cloaca. Roosters and chickens mate by rubbing their cloacas together, during which the sperm enters the vagina. Breeding henhouses have one rooster for 10 hens, but using artificial insemination, the sperm from one rooster can be used for 48 hens weekly.

Most production-line hens no longer sit on their eggs. This vital trait has been lost during the animal breeding, so the fertilized eggs must be incubated in an automated incubator. The incubation temperature is 37,6 - 38,6 C. Ventilation must allow constant supply of oxygen and removal of CO2. The developing fetus "breathes" since day 1. Air humidity must be 60-70 %, and the eggs must be turned to avoid the fetus from touching the egg shells. Before incubation most eggs are treated with gas. The gas kills 96 % of the bacteria covering the egg shell (dirty eggs can have 50 000 - 200 000 bacteria). If needed, the eggs can also be medicated by dipping them into a liquid medicine.

The fetal cells start dividing within three hours after the internal temperature of the egg has risen above 22 C. The development of a chick proceeds as follows: 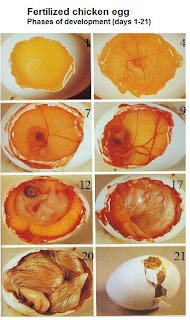 The hatching times vary in different bird species. For chickens the development of the fetus lasts 21 days, 30-32 for geese, 28 for turkeys, 18 for doves and 42 for ostriches.  If the incubation temperature varies from the optimum (depends on species), the incubation time will also decrease (in colder temperatures) or increase a few days.

Growth of chicks and young chickens

Newly hatched chicks need water and warmth immediately. Their yolk sac has enough nutrition for 2-3 days, after which the chick will need to eat to survive. During the first days the chicks need a temperature of 31-32 C, and it can be decreased by 3 degrees weekly until the temperature is 16 C. For hygienic and safety reasons the chicks are raised separately from hens. The animal density is max 12 chicks / m2 until they reach 12 weeks of age. Young chicks must be kept in a draftless area with good ventilation and 5-10 cm of litter.

The sex of the chick can be determined during the first three days after hatching. Male chicks are deemed useless and destroyed, usually by crushing . Chicken sexing is done manually, and can be very painful for the bird.

Egg and meat chicken producers byu their animals in batches (flocks). Therefore the breeders must make sure that each bird in a flock grows evenly: 90 % of the birds should weigh +- 10 % of the eaverage weight of the flock. Chicks are weighed 2 or 3 times between 5 and 15 weeks of age to assure even growth. In practice a selected sample will be taken and weighed, since each flock may have tens of thousands of birds. Young birds are also vaccinated. The light/dark program and light intensity are very important for young animals. If they will be raised in a poultry house with roosts, the chicks should be allowed to roost already at a young age. 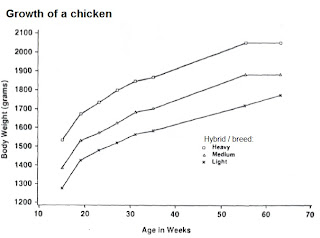 The chick feeds depend on the breed of the bird. Chicken breeders have exact feeding programmes for the rearing poultry houses to use. Starter feed is usually fed for the first 3 weeks, or until the bird has reached a certain weight. The started feed includes all needed nutrients in pressed crumbs, preventing the chicks from selecting their feed. Grower feed has less energy, and is fed during weeks 1-8. Developer feed has as much energy as the grower feed, but less amino acids. Pre-laying feed accustoms the ~17 week old chickens for the feed they will be eating when they start laying eggs.
Posted by MH at 18:42